The Metaverse Cryptocurrency That Should Be Avoided Like the Plague

There are no shortage of big-dollar growth trends to invest in. Analytics firm BDSA has forecast a doubling in U.S. marijuana sales to $62.1 billion from $31 billion between 2021 and 2026. Meanwhile, ResearchAndMarkets.com foresees the global cloud-computing market catapulting from $264.8 billion in 2019 to $927.5 billion by 2027.

But no broad-based trend has caused analysts to be more wide-eyed than the metaverse.

The easiest way to describe the metaverse is as the next iteration of the internet. It’s a 3D virtual environment that will allow users to interact with their surroundings and other people. Not only does this offer gaming aspects, but there’s the opportunity to create a completely new digital ecosystem within the metaverse.

Because no one is entirely sure what the full scope of the metaverse will entail, estimates as to its market value vary wildly. According to investment bank Morgan Stanley, the metaverse could eventually become an $8 trillion market in China alone! Calling it a more “immersive experience” in a research note, analysts expect the metaverse to replace the mobile internet.

Expectations are even higher for Matthew Ball, the CEO of venture capital company Epyllion. In an interview with Bloomberg News in November, Ball intimated that the metaverse could be a $10 trillion to $30 trillion market within 10 to 15 years.

Because of its many working parts, there are numerous ways to invest directly and indirectly in the metaverse. One of the most-popular destinations for investment dollars is the cryptocurrency space. 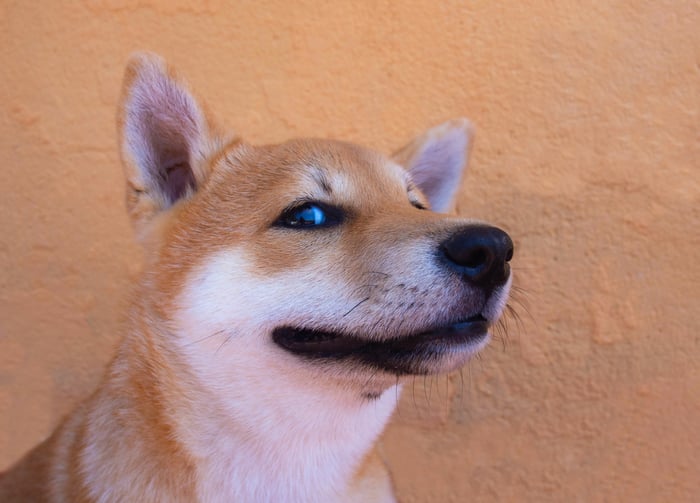 There’s a new metaverse player in the cryptocurrency space

In terms of pure-play metaverse cryptocurrencies, The Sandbox (CRYPTO:SAND) and Decentraland (CRYPTO:MANA) dominate. Both are blockchain-based virtual worlds built on the Ethereum network. Users can purchase digital plots on land on The Sandbox and Decentraland, which are stored as non-fungible tokens (NFTs). An NFT provides irrefutable proof of ownership of a digital asset stored on blockchain.

There’s also Axie Infinity (CRYPTO:AXS), which allows users to collect, raise, breed, and battle monsters known as Axies, with a minimum of three Axies needed to go to battle. Each Axie is an NFT that users own and can monetize within the game or via a marketplace. The ownership aspect of in-game creations is the biggest departure from traditional gaming, and easily the greatest lure of blockchain-based gaming.

But there’s a new player in the metaverse cryptocurrency space: Shiba Inu (CRYPTO:SHIB).

Developers behind the meme coin known for its historic gain of approximately 46,000,000% in 2021 introduced the world to “Lands” and a queue system on Twitter last week. Although details of Shiba Inu’s “Oshiverse” remain limited, the tweet and linked blog post note that Shiba Lands (virtual lands in Shiba Inu’s metaverse) will be available for purchase or auction using the Doge Killer (LEASH) token.

Shiba Inu’s developers are creating a queue system where participants will be placed in line to purchase Shiba Lands based on the amount of LEASH they own. This way developers can protect against land grabs and virtual land-flipping by small investors.

Shiba Inu is a metaverse crypto investors can easily pass on

While there’s no denying that the metaverse has been one of the hottest themes on the planet over the past three-plus months, investors need to recognize that not all digital currencies or ancillary players will be winners. The world’s hottest cryptocurrency, Shiba Inu, is the perfect example of a crypto that metaverse investors can avoid like the plague.

To start with, Shiba Inu can’t launch a metaverse or sell Shiba Lands without first having its layer-two blockchain in place, known as Shibarium. Shiba Inu is an ERC-20 token built on the Ethereum blockchain, which means it’s subject to the same processing lags and extremely high transaction fees that occasionally plague the Ethereum network. Shibarium is explicitly designed to lower these transaction fees to make SHIB-based transactions more cost-effective. Although Shibarium is being tested privately, it’s not clear when an official public launch will occur.

Even assuming the Shibarium upgrade goes off without a hitch, Shiba Inu’s blockchain-based Oshiverse is unlikely to launch until sometime in 2023 (likely early 2023). This effectively gives The Sandbox and Decentraland another full year to rake in virtual sales and for users to build out their virtual plots of land. In other words, it could be very difficult for Shiba Inu to carve out a niche in the metaverse with other projects getting a big head start.

Beyond the skepticism associated with its metaverse ambitions, investors should also be wary of Shiba Inu’s lack of a competitive edge. With more than 17,000 cryptocurrencies listed on CoinMarketCap.com, projects will need to stand out from the pack to have staying power. As of now, SHIB is nothing more than a payment coin — and not a particularly good one, at that. Fewer than 620 merchants worldwide accept it as a form of payment.

Historic precedence is yet another reason for investors to keep their distance. Even though the crypto market has produced a number of life-altering gains in the short-term, payment coins that have delivered jaw-dropping gains often retrace 93% to 99% in the 12 to 26 months following their peak. With Shiba Inu skyrocketing as much a 121,000,000% in less than 10 months last year, the expectation should be for a mammoth reversion.

If you’re hoping to make bank on the metaverse, my suggestion would be to avoid Shiba Inu.

This article represents the opinion of the writer, who may disagree with the “official” recommendation position of a Motley Fool premium advisory service. We’re motley! Questioning an investing thesis — even one of our own — helps us all think critically about investing and make decisions that help us become smarter, happier, and richer.

‹ U.S. is now the ‘Bitcoin mining capital of the world:’ GEM Mining CEO › Blockchain makes inroads in finance according to execs on earnings calls (NASDAQ:WETF)